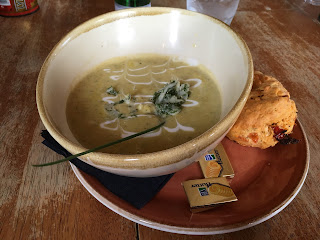 Very sad to announce that The Mountain Café in Aviemore has closed due to business loss because of the Novel Coronavirus or COVID-19. They don’t anticipate reopening.
***

While we were in Scotland this year we stopped in the small village of Aviemore for lunch at The Mountain Café. The Smoked Fish Chowder was so delicious, I actually bought their cookbook.

If you would like a copy yourself, you can order it from The Book Depository.

I have since made my own version of the Smoked Fish Chowder based on the recipe on page 65 of the cookbook and we thought it was delicious.
If you'd like to try it yourself here it is.


Ingredients:
1 Tbs Olive Oil (I used Meyer Lemon Olive Oil)
1-2 tsp butter, I used a little less than 2 but more than 1)
1 medium onion, diced
1 leek, thoroughly washed, slice in half lengthwise then sliced across thinly. Use only a little of the pale green part.
2 celery stalks, slice in half lengthwise then sliced across thinly
1/2 cup parsley, chopped finely
1/2 lemon
1/2 cup sauvignon blanc or other dry white wine
1-1/2 lbs white rose potatoes, peeled and cut into 1” dice
2 cans low-sodium chicken broth
1/4 cup heavy cream
11 oz fish; cod, salmon, tilapia or any kind of firm fish or a mix (I used ling cod, cut into bite-sized pieces
1/2-1 tsp dill, dried (fresh would be best but I didn’t have any)

Directions:
Heat the olive oil and butter in a large soup pot until beginning to sizzle.
Add the onions, leek, garlic and celery. Sprinkle with about a 1/2 tsp salt and saute over medium heat until beginning to soften.
Stir in the parsley, lemon half, the wine and the broth.
Bring to a boil and add the diced potatoes.
Let simmer until the potatoes are very soft, about 40 minutes. When the potatoes are cooked use tongs to squeeze the lemon, then remove and discard it.
Take off the heat and blend the soup with a hand blender until mostly smooth. Add the cream and blend again. Gently stir in the fish and the dill. Cook over med-low until the fish is just cooked.

Notes:
The original recipe used a carrot, lemongrass, fish stock and smoked fish. Also the juice and zest of 1 whole lemon. Then the cut halves were thrown into the soup when the veggies were sautéed.
Update: The second time I made this chowder I used the cut lemon halves as directed in the original recipe, delicious.
The photo above was taken by me at the Mountain Café restaurant in Aviemore, Scotland of the Fish Chowder I had that inspired me to buy the cookbook.
Posted by Tracey at 11/11/2017 03:13:00 PM